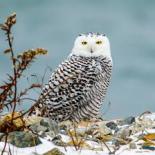 America’s National Wildlife Refuges represent the enduring conservation values of all Americans. When Teddy Roosevelt set aside tiny Pelican Island in Florida as the nation’s first national wildlife refuge, he recognized that our wildlife heritage represented something far more valuable than simply sourcing bird feathers for the latest fashion trends.

Today, there are many federal policy and budget proposals under consideration in Congress that could severely harm our nation’s National Wildlife Refuge System.

In late July, the House passed legislation to build a road through congressionally designated wilderness in Izembek NWR in Alaska. If enacted into law, this would set a dangerous precedent for all national wildlife refuges and wilderness areas throughout the country. The House released its FY18 budget, which included instructions for the Natural Resources Committee to produce an additional $5 billion to offset budget cuts. We expect lawmakers to use this opportunity to try and open the Arctic Refuge to oil drilling, citing the potential to generate an additional $1.8 billion within the next 10 years. Santa Ana NWR, located in South Texas, may become ground zero for the construction of President Trump’s new border wall as the Department of Homeland Security seeks additional funding from Congress. We at the Refuge Association are monitoring these actions and are working closely with congressional leaders and partners to stop these proposals.

Clearly we need to support our refuges because of their incredible natural resource values, and it is imperative that our nation protects its investment in our national wildlife refuges. The impressive economic value of refuges is undeniable. Forty-eight million people visit national wildlife refuges every year generating $2.4 billion to local economies. More than 35,000 people are employed as a direct result of having a refuge nearby, resulting in almost $800 million in employment income.

Refuge Friends Groups provide a 20 percent boost to the National Wildlife Refuge System workforce – the equivalent of 600+ full time employees and valued at $32 million per year.

Many refuge Friends call the experience the most meaningful in their lives. Their volunteer experience has not only deepened a commitment to the natural world, but also strengthened ties to their community. They will tell you that refuges are indispensible to wildlife and to our citizens.

Refuges always need new friends and supporters, now perhaps more than ever. We’re thankful for your continued support, and encourage you to get outside and experience your National Wildlife Refuge System.